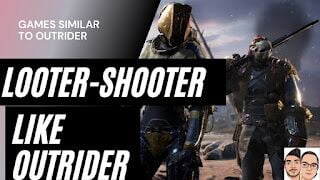 Playing outriders is a great opportunity for the gamers but as the game has just launched it is too much difficult to get server up as the demand is high. Few players are facing bugs and many other issues the developers are resolving the issues by delivering the updates as fast as it is possible but in between them, some gamers don’t get their requirements filled and are in search of a better alternative to outrider.

The gaming world has a great game full of action-adventure and which allows you to loot and select up to thousands of weapons every game provides a different environment and experience. you must play these games once before you die!

Destiny 2 is an online multiplayer first-person game. the latest season of destiny 2 is released 2 weeks ago named Season of The Splicer.

What is common in outriders and destiny 2

Outriders and destiny 2, both are Online based and they both are shooter-action games. Eventually, both games have great graphics. Even outriders are released this year and destiny 2 was released 4 years ago both the games get DLC and patches on monthly basis and improve the gaming experience. You would experience a lot of loot and different abilities weapons.

There are four characters with different all-over abilities. you will be defending planets from the aliens and of course, you are on the hero side the game is a looter shooter with a lot of weapons and their upgrades. You would be going across the galaxy and saving the planets by cleaning the alien vaults.
The game has a great story base and graphics and the environment in the game is totally awesome.

What is common in borderlands 3 and outriders?

Both the games are action, adventure,looter-shooter story-based games. You would be playing the role of a savior in both the games in borderlands you had to save the planet and outrider is an online-based multiplayer game. Both games have a variety of weapons, shields, costumes, and upgrades.
For the gamers in outriders and borderlands 3 you had to choose the character which meets your desires.

#3. The remnant from the ashes

The remnant from the ashes is based on the story of when the earth has collapsed by the evil Root and you were the survivor of the apocalypse You had to fight for your survival and There would be too many difficulties in between your path. the game has multiple dangerous enemies had you alone had to fight against them till one of them die. The main enemy in the game is Root and he is too much power.

The game is action, adventure, and looter shooter, The game drives a great story of the post-apocalypse of earth.

What is Common in outriders and Remnant from the ashes?

Both the games had a great character play and have been having a huge fan base. both of them are action-adventure and looter shooters. But the remnant is on the story side and the outrider is on the first-person shooter multiplayer-based online game.

The game Monster hunter world does not have story stuff but the game is a great looter shooter as you would be the hunter in the game and had hunt down Monsters from different spaces. Loot weapons and become more powerful.

The game would provide a huge variety of Weapons.

What is common in the outriders and monster hunter world?

Both the games are of the same genre and the monster world has a great market in the gaming field as it is the 5th launch in the monster franchise and outsiders have just arrived. the game Monster hunter would replace the outrider if you are in a search of online shooting games. Both the games are good at their place as both so many common and rare combination.

Anthem is a story-based multiplayer online looter shooter genre game. The game is based on the myth that gods have vanished and humans are left confused behind the humans are in great danger in the beautiful landscape The reason behind the survival of humans is the wall which protects them dangers monsters and enemies you are a worrier called freelancer. The freelancers group protects the humans by protecting the wall.

What is common in Anthem and Outriders?

Both the games are online multiplier role-playing games in the basic need in both games is to fought against the monsters and loot them and become more powerful. The advantage that games provide the gamers with is that you are not alone.

Apex legends are a hero shooter and looter Battel royale designed game and was too much loved by the gamers and was a game-changer. Apex legends updates with new seasons which bring a new variety of surroundings and weapons upgrades.

What is common in apex legends and outsiders?

Both are online platform-based games. You would have a bunch of categories and varieties of weapons and their upgrades. Both the game can be played in third-person mode.
The Reason which creates the difference in both is the big titled game is that apex legend is a battle royal game and outrider is role-playing different abilities character game.

The game is the franchise of the division.

What is common in division 2 and outriders?

Both the games are third-person action looter shooter role-playing game and the things which made both the game great is that their weapons list.

Mass effect is one of the most loved games of all time. The mass effect game is a futuristic game with a lot of different enemy aliens all over the galaxy a lot of weapons and space ships.

Mass effect Andromeda starts in the yea 2185 and you are going to find a better place for your home in between this journey you will meet extraordinary enemy aliens and friends too.

What is common in Mass effect Andromeda and outsiders?

Both the games are futuristic with next-level shields, weapons, costumes, vehicles. YOu would enjoy the looter shooter interface in both of the games. You would come across different abilities enemies which require next-level weapons which could be done by upgrading your weapons. So many new things are going to be introduced as both the games go towards the end.

All of the games are at-most best alternatives to outrider. If you are a lover of action, adventure, shooting games then you had listen the names of these AAA titled games before. All the 8 games listed above are too loved games of the gamers and few of them are listed by the title game of the year, so make a try to one of the games above.
Don’t forget to share the list with your friendzone.