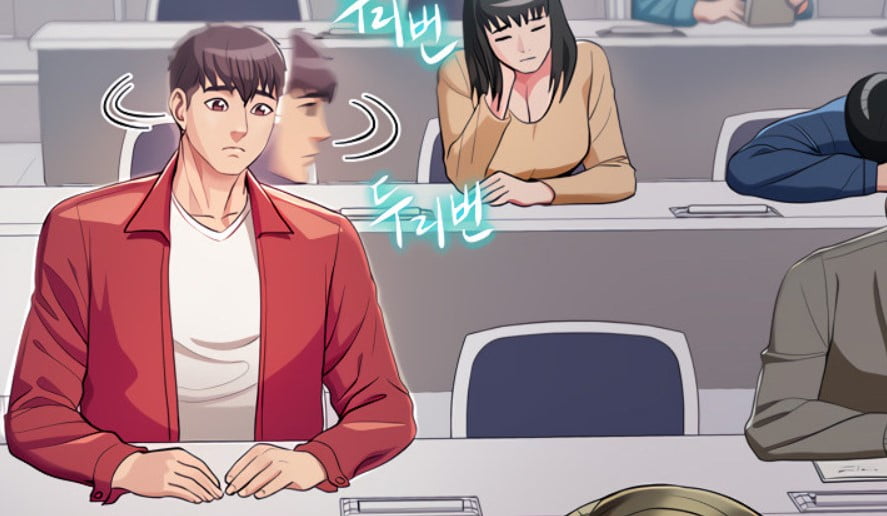 After completing his military service, Lee Hwan returns to school as a handsome man.

It was his first day and he was worried as his friend (SEUNGJIN) refuses to come to school, As it is OT only and he has plans of drinking with YERIN.

Yerin Studied Abroad and she is in 4th year, Yerin and Lee Hwan both were too good friends that people assume that they were dating. Now they both have changed.

well, He went to class and got a seat all alone, The Professor Attending OT was HAN SEOL HEE.

HAN SEOL HEE is a professor of acting skill department. She was child actress since then Lee knows him and he fell in love with her.

Lee had met Han Seol Hee years ago at her shooting set, But Han Seol might have remembered it by the keychain.

The Love Triangle between Lee , Yerin and Han Seol Hee has started to build up more drama in the series. However Lee defines Han to be his first love and Yerin likes him since back then but lee went to army.

The webtoon is going to be fantastic, with many ups and downs in Lee’s life.

Jung Hye Yoon goes out with Lee Hwan. They go to restaurant to eat something (Lee’s Idea).

They Ordered Soup and it was a joke while they mention which 20 year old teenage drinks soup.

They both had a big chat but could not got that frank to show off their feelings about each other.

Hann Seol Hee on the other was feeling sad about what she said to Lee (Previos Actions not to meet him in future. ) and was too sorry about that.

She was waiting for him to text back. while he was busy in talk with Jung Hye.

Jung Hye-Yoon confesses to lee Hwan that no one is coming to today’s meeting but didn’t expect that no will be attending class too.

Jung Hye had done the assignment and was happy that she was with Hwan but on the other side Jo Ye-Rin thinking that will be taking todays class with Lee Hwan entered classroom.

Both of Them Jung and Ye-Rin surprised and shocked to see each other because they were not expecting any interruptions today.

Later on they started debate in class to show off who is more intelligent while Lee Hwan was bored by the class.

Chapter 26 and chapter 27 of A different class was epic since it built up a magnificent plot from beginning to end.

Chapter 27 showed many things but didn’t gets to conclusion and made a lead to upcoming chapters of “A Different Class”.

Both English and raw chapters of manhwa A Different Class are releasing at the same time.

Total 27 chapters have been dropped so far.

The author has still yet to confirm the release date of the next chapter, but the upload rates of the previous chapters disclose that it will be on June 16th, 2022.