Green Hell Maps : All Details You Need To know 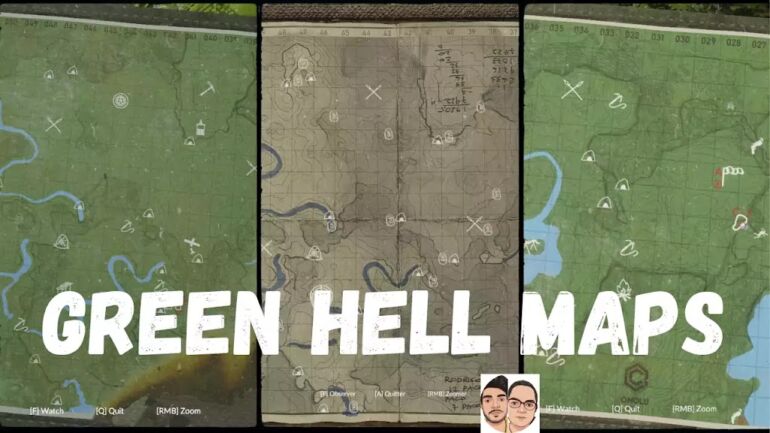 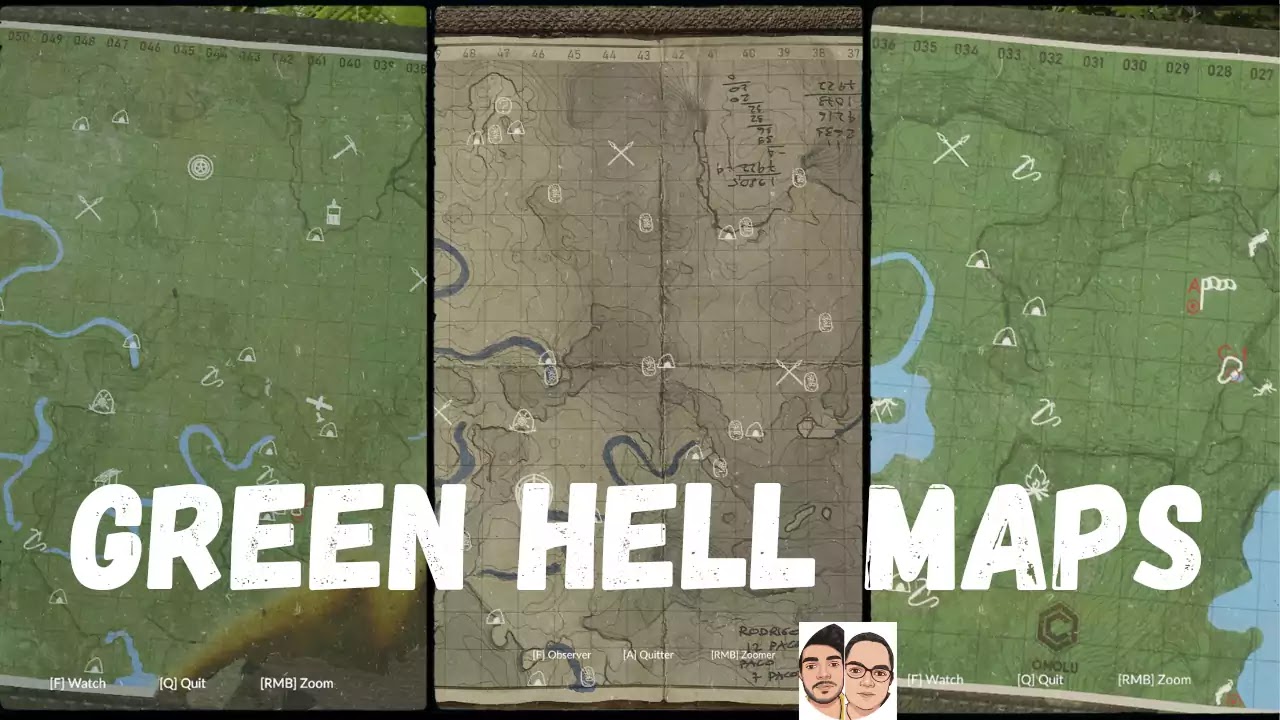 Green Hell has 5 Maps with the latest update of spirits of Amazonia. At the starting of the game “Green Hell” players do not have the map, As they complete the story they Found Map 1 and in order to get another they had to compete with the previous map, and the location of each map is different which taught on later.

All of the 5 maps are completed so that to get the whole icons in the map and each icon use is shown in the image below.

Smartwatch will help in marking a place on the map and it will work as a GPS device to get to the location. no need to open the map again and again. 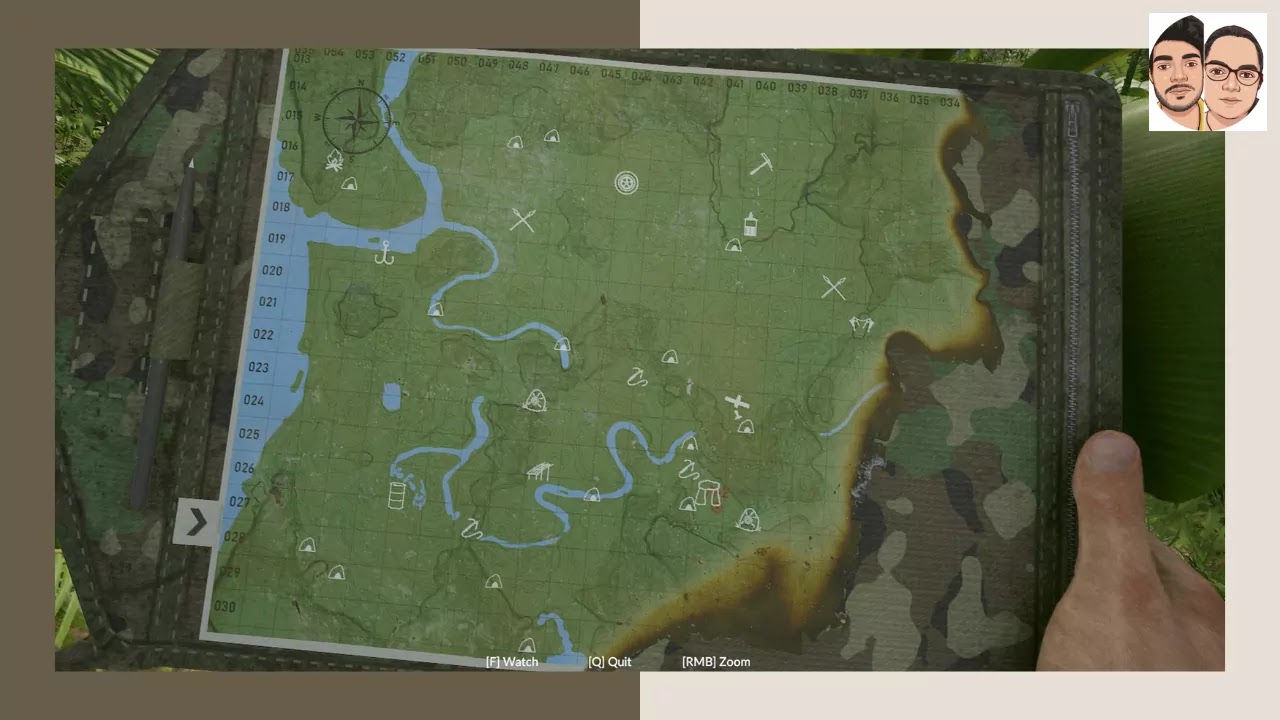 Click on the Map 1 image to Zoom
The first map in story mode is found in the Abandoned Tribal Village near the start point of the Green hell and next to the shallow river valley. After finding the map You can access it by pressing “M”. Remember to save the game to do so make camp which could be made with a hammock near there. you can unlock several blueprints in the Abandoned Tribal Village such as a cage trap, stone ring, and dryer.
The first map in the survival mode is found in the Drug Faculty. Drug Faculty is one of the best places in green help as it is full of food items and weapons and you’ll easily find a sleeping place as well. Remember jaguar is also near that place so that is the reason it has been overloaded with weapons. 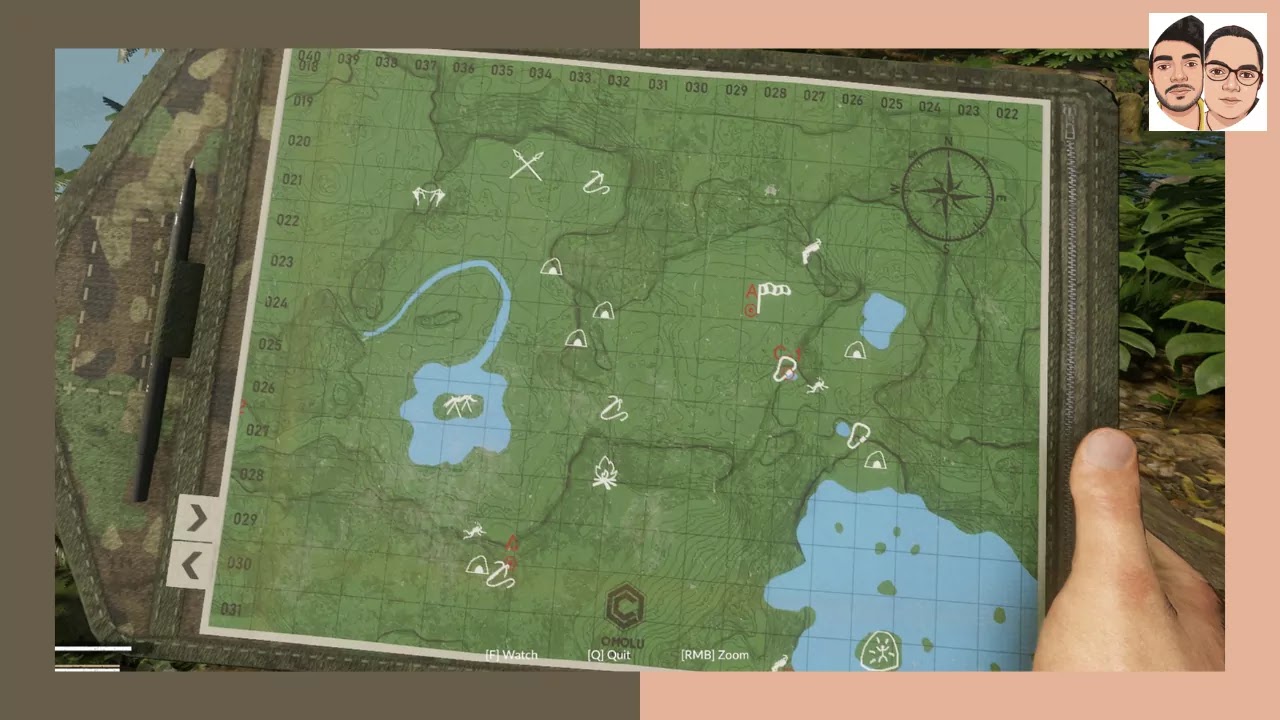 Click on the Map 2 image to zoom
Map 2 in both modes, survival and story mode is found at the Airport.
The Airport is a forest environment area and its coordinates are: 29W/22S
The airport is found in an open area on a cliff edge before going to the airport you must get the Grappling hook as without this tool it is difficult to get to the Airport.
At the airport the first floor is open and there you will get map 2 hopefully but to access the second floor you will need a key as the second floor is locked. 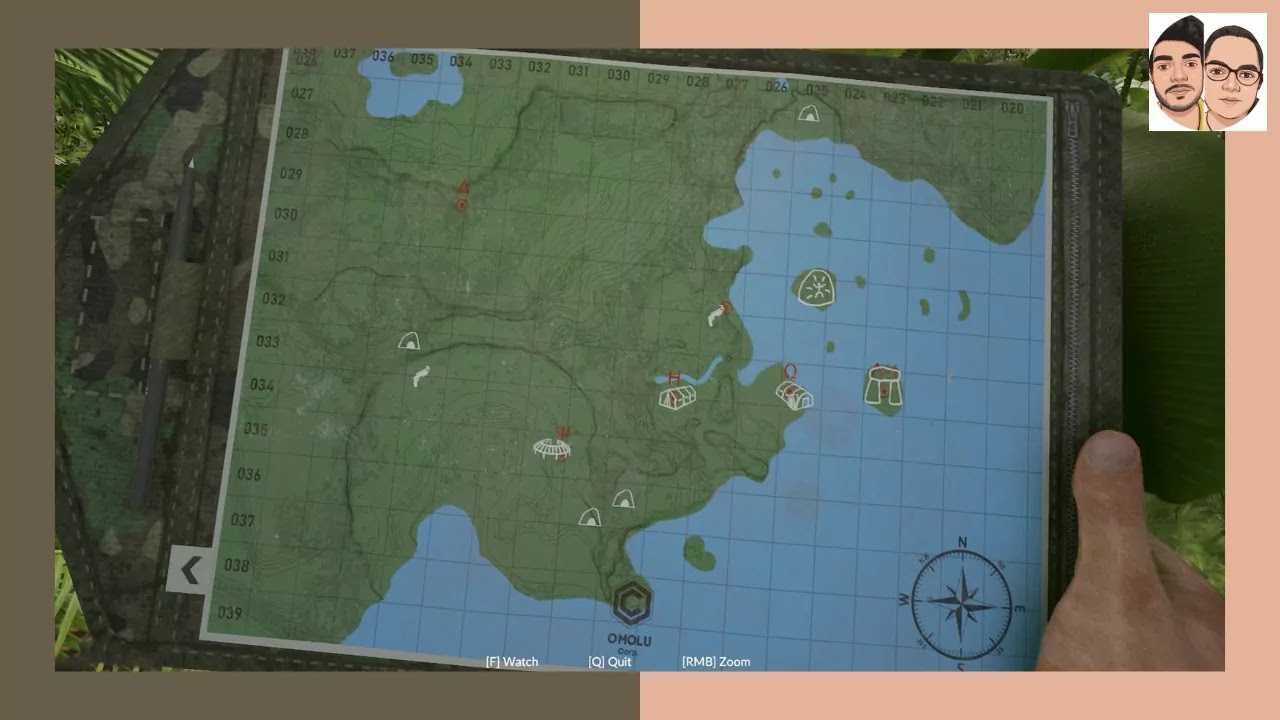 Click on Map 3 Image to Zoom
Map 3 in Both modes, Story and survival mode is found in Omega Camp.
The coordinate Of the Omega Camp (Research Lap) is 25W/33S. Omega camp is a jungle with two big tents nearby the lake and the Third Map is found in one of the Tents.
The first tent contains a whiteboard, Projector, Map 3, and food and drinking supplies. While the 2nd Tent is a research lab with a blood-testing machine there and some notes and blood samples too. This tent can only be accessed in story mode only and it contains the cure of the current pandemic. 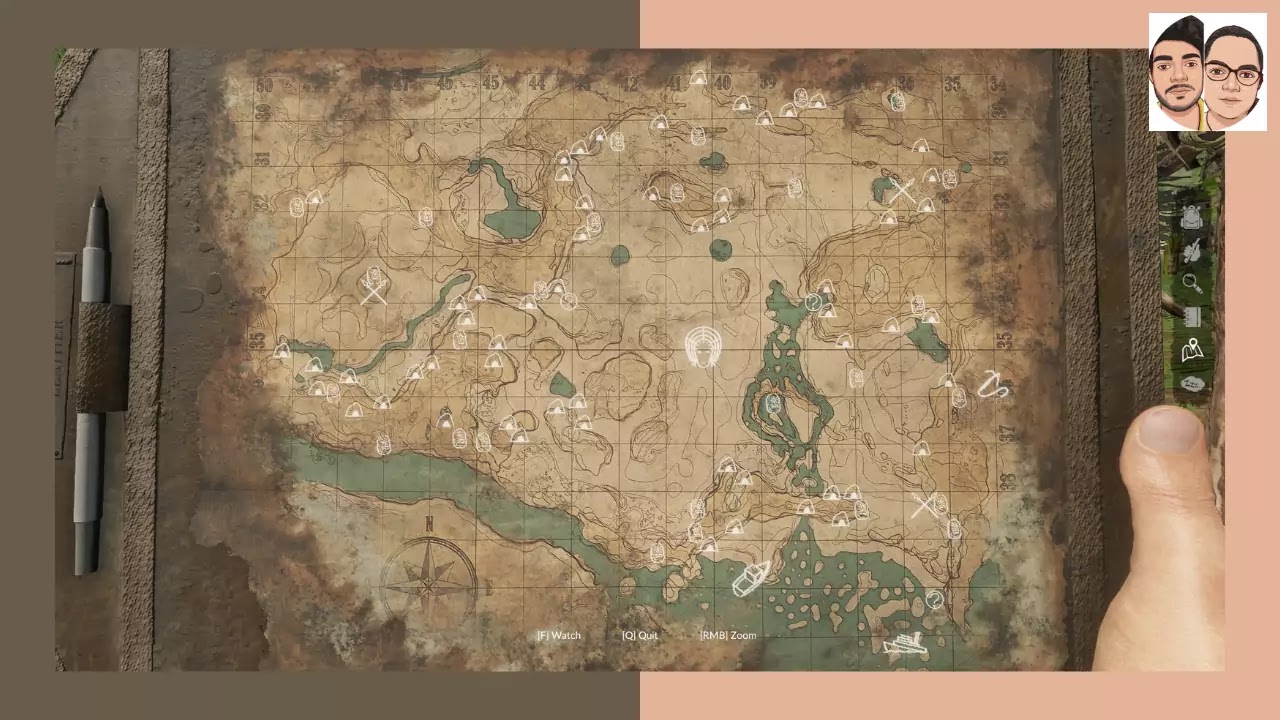 Click on Map 4 image to Zoom
Map 4 in survival mode is found in a steamboat (sunken ship).
Map 4 in the story mod in Spirit Of Amazonia is also found in Steamboat. 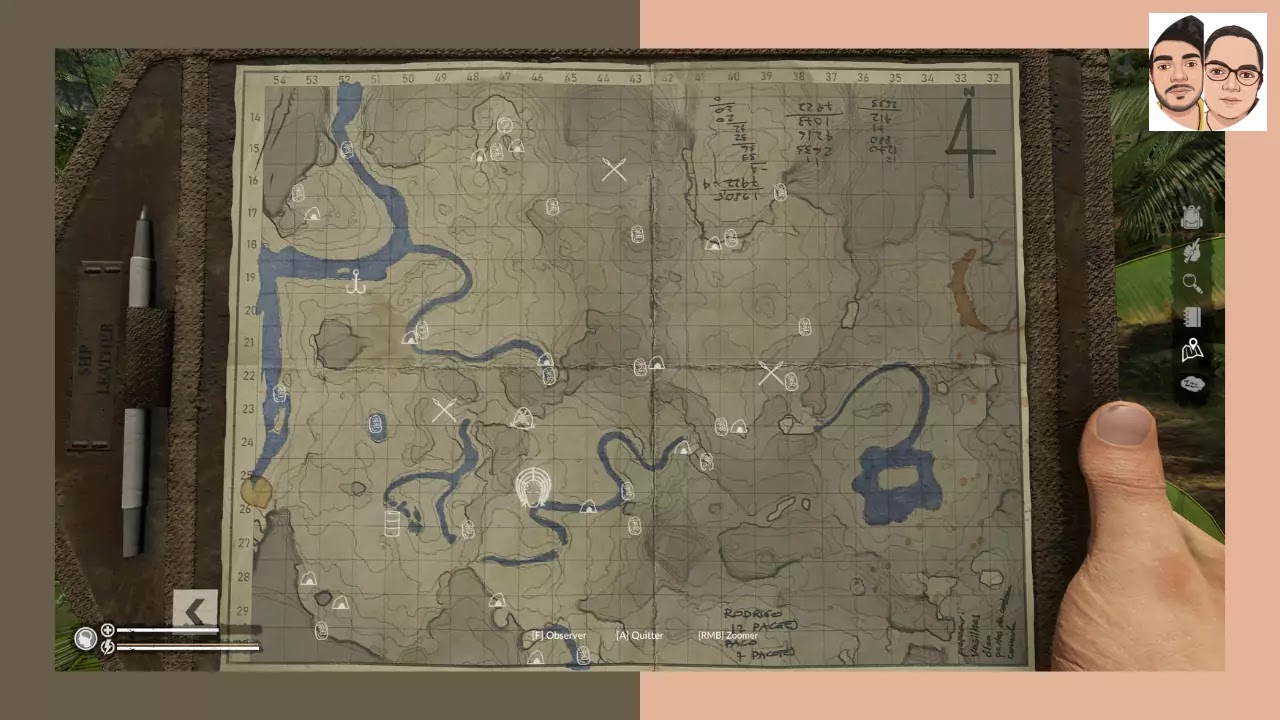 Click on the Map 4 Spirit of Amazonia image to Zoom
There you’ll find a huge ship the top room of the ship has Map 4 and the coordinates are 36W/42S
You’ll come across many dangerous aquatic animals in the location in green hell and you’ll find iron ores, Food, Golden architect, and many other things.

Click on the Green Hell Map Icons/Marks to Zoom
All 5 maps in Green Hell have too many icons and each icon stands for something they tell tels about the Caves, Boats, Camps, Villages, and Legends. All details of each Map icon shown in all 5 maps in green hell are explained well in the Image above.
Share this map’s details with your Green Hell buddies!