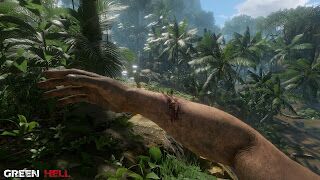 In Green Hell, a Grappling hook is needed for climbing place and to reach lambda 2.

I’ll be telling you the easiest and fastest way to grab a grappling hook. For that just follow the given steps below.

The grappling hook is an instrument used to clear lambda 2 missions in green hell. The main use of the Grappling hook in-game is to get to higher Places.

Follow Below Steps To get the Grappling hook in Green Hell

First, open your map and sprint towards the camp, and reach the camp marked below in the image.

Now pull up your watch by Holding F and scrolling the mouse to set towards 46W/25S.

Now go through the jungle and stay alert of the jaguar and tribals, they can attack you. keep going until you reach Tribal camp between the path please check whether you’re on the right path or not through compass and map.

Go through the cave shown in the image below

After passing the cave move left from that and go until you came to a fallen tree bridge made over a river way pass the bridge and open the Green hell map and mark the jeep’s location i.e  44W/17S.

After reaching at jeep grab the gas as it would be needed in the future in the mines to start the generator to bring the grappling hook. grab other items also like food etc.

Follow the river and stay in the direction after reaching the area you had to find the elevator which would help to go down to the mines where the hook is.

There would be a small cave go through that then you’ll find an elevator Shown below.

Now put the gas inside the generator and start it and press the switch and go down into the mine.

You’ll find a house go there and at the bench, there will be a grappling hook grab it and other items.

How to Reach Lambda 2 With Grappling Hook

Press left shift and Numpad 6 you would be teleported to the save game location climb there with help of a grappling hook.

for this to happen you had to save the game at the start.

Green Hell Grappling Hook Location: How to Reach it

Telling the easiest way to get grapple is to first get the fuel that would be needed in the future to start the elevator.

Use of Green Hell Grappling Hook

use of the grappling hook in hell is to climb high ledges. first, it will be used to reach and climb lambada 2 and in the later game, you’ll be using it to get to the top of the mountains or get out if stuck at any hole place.

but as the game goes on you’ll find that there is another weapon similar to it i.e grappling hook gun which is far better than this one.

Still Confused To get a Grappling hook in Green Hell then watch the video below.