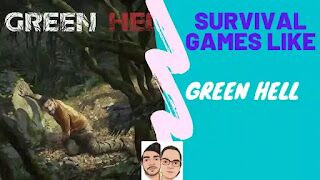 As You are here so this definitely suggests that you are already a big fan of  Green Hell, and obviously who will not, It is super exciting and amazing, So, Let’s find out some similar Games as Green Hell, I’ll be helping you out by describing the Games plot and Its similarity with Green Hell. So let’s dig in.

From this point, we are entering our gaming world, which provides us another level of comfort, so hopefully, you’ll enjoy this gaming Journey with me. Let’s start

It has a rating of 9/10 from the stream and 4.3/5 from amazon.
It is a Survival Horror Game. So, Basically, the storyline starts with You as a Survivor of the Nuclear Third World War. This war destroyed a large part of the World except for some fictional Countries or cities. For surviving you need to find shelter, food, water and you need to save yourself from Zombies who were created because of Nuclear Fallout. Your main objective is to survive for the long time as possible against Zombies Hordes and elements, You can search for tools to construct buildings and find new elements as you proceed further in the Game. For food, you can hunt animals and can collect required materials from nature. Food and Water are basic needs for Survival. You need to protect yourself from illness and injury. Found story plot interesting read more about 7 days to die.
As the day progresses, Zombies will become more aggressive and survival will become hard. You will get days and Night Cycles and according to which you are safer during Day and in danger at Night.
According to Game Title is On every 7th day of in-game time, a Blood Moon event occurs and all infected animals and Zombies will attack your area, to survive you need to have all the items to protect you.
This can be played as multiplayer through player Hosted Servers.

How 7 days to Die is similar to Green Hell?

Firstly, Both are survival games and the main objective is to survive. Same as Green Hell you need to find shelter, food, water which are basic needs to survive. In both games, you need to colled items and then you can construct buildings or Tools as you want. In Both Games, you should be careful from injuries and illness because these can reduce your stamina and increases the risk of losing the Game. Multiplayer in green Hell allows up to four players and you can also play multiplayer in 7 days to die.

It has a 9/10 rating from steam.
It is an action, adventure, and survival game.
It can be played as Multiplayer and Single-player, either with a third-person or First-person Perspective.
It is set in an open-world environment. There are total 176 creatures on Ark, at early stages, you will witness Dinosaurs and other prehistoric creature and as the game progresses you will see some mythical creatures as Phoenix, griffin and some robotic creatures as Enforcer and scout and some original creatures like Karkinos, Velonasaur.
One of the most general tasks in the Game is Taming Creatures, and Taming process can vary from creature to creature as some creatures are more violent and dangerous. There are different weapons provided as tranq darts or blunt weapons .to knock out dangerous creatures Narcoberrires and spoiled meat can be used. Once the creature is tamed player needs to feed the animal, and Some creatures are tamed just by approaching them carefully and giving food.
You can enjoy these creatures different abilities, like riding on their top, and they help fight with the enemies when commanded.
Players need to check their Health, Stamina, Oxygen, Hunger. the player can gain experience by Harvesting Material, crafting, killing, or discovering explorer notes. these experiences will be used to improve the player’s stat. creatures also gain experience and which helps to improve their stat in-game.
In the game, players can develop buildings using different metals for shelter, and also weapons and different accessories can be attached to their weapons like torches and pistols or assault rifles.

How Ark: survival evolved is similar to Green Hell?

Firstly, Both games are survival as well as can be played as multiplayer or single-player. In both games you need to keep a check on your health, Stamina, and shelter, so, In both Games, you need food and health to survive and fight. Both Games are adventurous and exciting. You can construct your shelter or Building or weapons, so in both games, Crafting is an important feature.

It has received a rating of 9 out of 10 from steam.
It is a Survival Game. This is Multiplayer Game. The main Objective of Rust is Gathering materials to survive the wilderness. Players need to keep track of their hunger, thirst, Health, or Risk Dying. There are different wild animals like Bear, Wolves which are threats to survival but another threat is other players playing the game because this game is only played in Multiplayer Mode. Players can use firearms and bows and other weapons to protect themselves. Crafting is an important feature of Rust, Player, and discover specific items by roaming in the open world of rust.
To protect yourself you need to build Bases or join clans. Raiding is also an important part of this Game.
In the Beginning, players are provided with rocks and a torch, these rocks can be used to cut trees. By hunting food and Cloth can be obtained. Mining Provides Stone, Metal ore, and chopping trees provide wood.
.So, gathering various resources is an important aspect to survive in Rust. Blueprints are available for advanced items.
Starving can lead to death and other threats to survival are Drowning and Hypothermia, wildlife attacks. Additionally, different layers of radiation become harmful if proper clothing is not done.
One of the main aspects of Rust is Clan, clans share shelter and food to survive together. There are Airdrops and Combat between players which makes the game more interesting.

How Rust is similar to Green Hell?

Both games are survival and can be played as multiplayer. In both games, you need to keep a check on your health, Stamina, and shelter, and you need to build bases to hide and survive, so, In both Games, you need food and health to survive and fight. Both Games are adventurous and exciting. You can construct your shelter or Building or weapons, so in both games, Crafting is an important feature. In Both Games general aspect is to survive for the longest time as possible, and to protect yourself from injuries, animals, and various risks.

This is an open-world survival action-adventure Game, The best and different thing about this game is You can explore the ocean world of an Alien Planet. This game is played based on the First Person Perspective. The storyline starts with a  Deep Space Vessel, Aurora which is sent on space, Its primary mission is to build a section of High-Speed space travel infrastructure known as phase gate. its second aim is which is unknown to most of the crew is to rescue a ship called degasi which was crashed on planet 4546B 10 years prior. you will be playing Riley Robinson, who is a lone survivor. The main aspect of this game is surviving and exploring the ocean while dealing with dangerous creatures.
players can collect resources can construct tools by crafting and also can develop bases. a player can interact with the wildlife of the planet. there are two explorable islands and day and night cycle which affect the visibility of the player and also attacks of wildlife. most of the game is set underwater as the player needs to find out the cure off the highly infectious disease Khaara bacterium, which leads to the death of around 140 billion population. the species which can cure this infectious disease is only located on planet 4546B, which can produce an enzyme that cures khaara.
difficulty modes of the game can be chosen, there are four difficulty modes: survival mode, freedom mode, Hardcore mode, creative mode. Know more about Subnautica.

How Subnautica is similar to Green Hell?

firstly, Both games are survival games with a lot of adventure. two survive player needs to track their health and stamina .players need to construct their shelter to protect themselves from wildlife. Both games are about exploring and creating weapons and also crafting new things which makes the game more exciting.
The main aspect of both the games is the same which is surviving for the longest time as possible but in subnautica we explore the world of the ocean whereas in green hell we explore Rain Forest.

It has received a rating of 10 out of 10 from steam.
This game is a first-person adventure game with survival and horror elements.
You will be playing as Daniel and Your main task is to navigate Castle Brennenburg and avoiding various Dangers. There are different puzzles and different Physical activities which can be done like opening doors and fixing Machinery, and smaller items can be saved in inventory. Solving puzzles help to solve the mystery.
Your Health needs to be tracked as because of Fear of dark Sanity decreases in Dark and witnessing unsettling events or looking directly at Monsters also decreases sanity. So, Sanity can be increased or maintained in Light. So, You can use candles, torches, or deploy an oil-burning lantern. Low sanity can lead to visual and auditory hallucinations which increases the attack of monsters and high chances of losing the Game.
If the monster sees you then the only option is to run and hide. The player can restore Daniel’s Health by using Laudanum found throughout the game. There are different levels of the game, In difficult level monster will search for you for a longer period of time.
The storyline starts with Daniel awakens in a dark room and founds that he has no memories about his past, as the game proceeds Daniel finds different hints by diaries and clues and recovers his memories in pieces. And as the story goes further Daniel finds out that he drank a potion of Amenisa which leads him to this point.

How Amnesia: the dark decent is similar to Green Hell?

Both Games are survival Games and the main aspect is to survive as long as possible.
In Green Hell, you deal with wild animals as attackers and In Amnesia you deal with monsters and Other creepy things, In both Games Health plays a vital Role. If you are a fan of the Horror genre then must try Amnesia . Green Hell is quite Realistic and with a realistic storyline and In Amnesia it’s more fictional and horror Fantasy but both  Games are amazing as viewed with a different perspective of uniqueness.

The Forest is an endurance frightfulness game First released in 2014 and got great attention in few days and got become one of the best survival games. The game happens on a distant, vigorously forested promontory where the player character Eric Leblanc and his child Timmy are overcomers of a plane accident.
The game highlights nonlinear interactivity in an open world climate played from a first-individual viewpoint, with no set missions or journeys, enabling the player to settle on their own choices for endurance. The game is still getting updates and the developers are making it awesome update by update.

Read detailed comparison between green hell and the forest

Hopefully,You will find your favorite game among these above-mentioned Games, and you must explore these Games to definately feel why these are in the Top 6 list and enjoy your fantastic journey in Gaming World
Thank You for reading
Stay safe, Healthy, and Game Lover ❤️